Summary: This is a collection of young adult fantasy stories. Each offers a uniquely Wrede perspective. The last story features Cimorene, the heroine of the Dragons series. Additionally, the last work in the book is a recipe for chocolate cake, written using the directions of a battle-weary soldier.

Review: This is a fun collection for children and teens, or anyone feeling young at heart. I highly recommend. 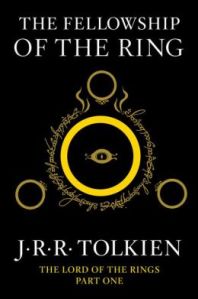 SUMMARY: This fantasy novel is the first in the famous and popular The Lord of the Rings trilogy. It describes the beginning of the journey of Frodo and his companions. It is first set in the Shire, from which Frodo, Sam, Merry, and Pippin set out with the ring Bilbo stole from Gollum and willed to Frodo. The four hobbits eventually meet Aragorn, who leads them to Rivendale. At Rivendale, it is decided that the ring must be destroyed, and Frodo is appointed to be the ring-bearer. The four hobbits, Gimli, Gandalf, Aragorn, Boromir, and Legolas form the fellowship meant to carry the ring to Mordor. Through the course of the novel, Gandalf is lost while fighting the balrog and Boromir is slain by orcs while protecting Pippin and Merry. The fellowship is broken up when Frodo, followed by Sam, leaves for Mordor and Aragorn, Gimli, and Legolas set out in search of Merry and Pippin.

Check out my reviews for The Two Towers and The Return of the King. 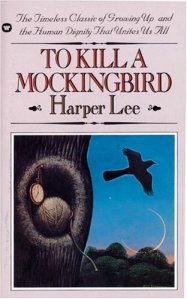 In the novel To Kill a Mockingbird, Miss Maudie perfectly describes the nature of her life-long friend, Atticus, who is a lawyer. Maudie tells his children, “I simply wanted to tell you that there are some men in this world who were born to do our unpleasant jobs for us. Your father’s one of them.”

The nature of his “unpleasant job” in the novel is simple: Atticus defends a black man against the blatantly, undeniably false charges of a white woman in the south in the 1930s. Atticus is ridiculed and threatened by the townspeople, who don’t understand why he is trying so hard to save someone they are convinced is guilty.

Atticus perseveres through the destruction of his reputation. He ignores the whispered criticisms and shrugs off the mocking insults. His belief in doing what is right enables him to wade through the venomous hate, so that he can teach his children to stand tall and proud. He leads by example; doing what is right is not always popular, but is necessary nonetheless. Even when his family is attacked, Atticus takes what he believes is the just and moral path, never growing bitter or regretful.

Summary: This fictional novella depicts life for two traveling workers during the Great Depression. George and Lenny are two men who are constant companions as exemplified in the book’s theme: it doesn’t matter who you are with, so long as you are with someone.

Lenny is a mentally challenged but hardworking giant of a man. George, his opposite in every way, is also his protector. The pair plan to eventually buy a farm together so that they may work their own land and keep animals, including Lenny’s beloved rabbits.

The friends get jobs working on a ranch, where they meet the wife of their boss’s son. Lenny, out of love for “soft” things, grabs the woman’s hair. When she screams, Lenny panics and accidentally kills her. Lenny runs to the place George told him was safe, and awaits the arrival of his friend in fear that he will no longer be allowed to tend the rabbits on their imaginary farm.

Out of mercy and compassion, George sends the lynch mob on a detour and finds Lenny on his own. George begins again to describe their farm and wonderful future while Lenny listens excitedly. In the midst of this distraction, George shoots Lenny in the back of the head.

Reflection: There is a great deal of symbolism present in this novel. Its title is taken from a poem by Robert Burns: the best laid plans of mice and men often go awry. George may represent “men,” who do things that must be done whether they wish to do them or not. The lynch mob may represent “mice,” as they set out as a group in a cowardly attempt to kill an unarmed mentally handicapped man in secret.

George may also be more like Lenny than outwardly shown. Lenny killed small animals (mice, birds, a puppy) by loving them too strongly — while “petting” them as they lay in his pocket. George killed Lenny (whom he loved) while Lenny felt safe and secure — Lenny was in George’s “care” being “soothed.”

Lenny was in many ways similar to the mice he loved. Mice are often harmful but mean no harm. They are frightening but easily scared. They are likewise fragile and can be crushed easily by forces bigger than they are. Lenny similarly acts off baser instincts and was “crushed” by forces bigger than he: his circumstances; his lack of natural intelligence; his inability to control himself; his friends; and smarter “prey” meaning to harm him. 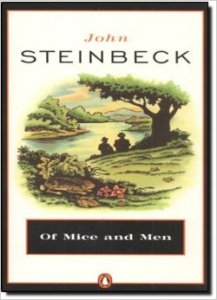 Summary: This lengthy novel describes the autumn of 1982 in the life of Paul Edgecombe, a supervisor in the death row wing of a prison. The hallway was lined with green tile (hence the title) and ended in Old Sparky, the electric chair. This novel is a frame story, being told as though elderly Paul was writing his memoirs. In the year he writes about, an extraordinary inmate named John Coffey arrives, convicted of the murder of twin children. Through the course of the novel, we discover John is innocent and that the crime was actually committed by another inmate. We also learn that John has a God-given gift to heal. Because it is the south in the 1930s, Coffey is not given a new trial, but is executed with as much dignity as Paul and his officers can give.

Reflection: One key idea King presents is that the damage we receive from those we depend on and love is often irreparable, having a lasting impact on our minds, bodies, and lives. Another idea is that we often destroy the things we love in favor of protecting our fears, biases, and reputations.